There are few artists as inspiring as Jason Isbell.  To overcome so much, to be so talented, and to rise to a level of recognition that brought the Americana genre mainstream, it is my honor to write about Jason in my blog.  Enjoy!

American guitarist, singer, and songwriter spent six years with Drive-By Truckers, Southern rock outfit. In 2007, he left the group and started his solo career. During the tenure with Truckers, Isbell honed his skills of songwriting. In “Sirens of the Ditch” and in “a bluesy,” he funneled his talents of songwriting, and in 2007, Southern Swagger and a punk-infused lesson in guitar tones marked his solo debut. Newly re-energized and sober, Isbell started attracting a significantly wider audience for his concerts, and Isbell’s successive studio albums The Nashville Sound and Something More Than Free reestablished his status at the roots music scene as the best songwriter.

In 2007, after separating his path from Drive-By Truckers, he launched his solo career without wasting any time and a group of songs he had been planning for years created the foundation for Sirens of the Ditch that was co-produced by Patterson Hood who was DBT’s front-man and also featured Shonna Tucker on bass and Brad Morgan on drums who were former bandmates.

Isbell performed more than 200 shows for several years he took a break in 2010 and returned to northern Alabama, his home. By recent downturn of the economy, his home had been hit badly inducing Isbell to write the latest set of songs regarding barflies and war vets and this resulted in the production of Here We Rest released in 2011 and in 2012 his work Live from Alabama was recorded in Birmingham at Work-Play Theater and at the Crossroads, Alabama. Recognizing his sobriety, Isbell created an album of redemption and haunting atonement, the impressive and sparse Southeastern which released in 2013. Southeastern was a smash with commercial success and critics that took Isbell to a broad and new audience.

Isbell issued a video release “Live at Austin City Limits” in 2014. In the same year, to record the follow-up for Southeastern, Isbell returned to the studio. Something More Than Free came out in result in July 2015 and won the Grammy Award in the following year for the best American album. The Nashville Sound’s first single “Hope the High Road” was released in March 2017 by Isbell which finally arrived in June. Credited to the 400 Unit and Jason Isbell, compared with previous two efforts of Isbell, the album was more band-oriented, boasting a more extensive and more musically variegated sound. The 400 Unit and Isbell at Nashville’s Ryman Auditorium in 2017, sold-out-six-night-stand was played by them. And in October 2018, a souvenir of a 13-song concert, Live from the Ryman was released.

Something about their simple, yet classic design, and their surprising stylistic versatility (they’ve been used in genres from country, to rock, to soul, to RnB, to jazz, to heavy metal and many more) always has me coming back to them.

My own musical home incorporates that Bakersfield country sound and a little rock ‘n’ roll, so the Telecaster’s ability to switch between a rich, bright tone (as often heard in country), and a warm, bluesy tone depending on the pick-up used, has been invaluable to me on stage.

Like many things that go on to change the world and how we operate, the Telecaster hails from fairly humble beginnings.

Leo Fender was born in Anaheim, California in 1909, and he showed interest in playing with electronics from an early age.

Having lost two different jobs thanks to the onset of the Great Depression, in 1938 Leo began his own radio repair shop, called Fender Radio Service, having borrowed $600 ($6,274 in 2019).

This led Leo to meet lap steel player Doc Kauffman in the early 1940s, and the pair decided to go into business together. They initially sold only Hawaiian guitars with pick-ups, but as the 40s progressed and big band fell out of fashion, western swing, honky-tonk and rhythm and blues took its place and created a demand for louder and cheaper instruments that could handle the abuse of roadhouses and dance halls.

Leo recognized the demand and wanted to build a guitar that would meet these needs as well as being easier to tune and play.

In 1950 the Fender Esquire was born, at first with only one pick-up. The following year a second pick-up was added and the guitar was re-named the Fender Telecaster.

Thanks to its solid body, the Telecaster was able to produce a much clearer and sustained sound than its rivals, which was vital in cutting through the noisy settings of honky-tonks and maintaining prominence through the cacophony of string band instruments.

It was also able to emulate steel guitar sounds. Both of these factors meant it was a perfect fit for the country music of the day, as well as being able to cross over into funk, electric blues, and the about-to-break rock ‘n’ roll. It was versatile enough that it was able to achieve longevity, despite the arguably more sophisticated build of the Stratocaster arriving as early as 1954.

While many other guitar styles and designs have come and gone in the almost 70 years since the Telecaster debuted, it remains a popular choice for many artists across genres, but perhaps most notably country music.

It was a staple of rock music throughout the 1960s and 1970s, with loyal players such as George Harrison, Pete Townshend, Keith Richards, Bruce Springsteen, Joe Strummer, and even Jimmy Page’s earlier recordings with Led Zeppelin, whose iconic “Stairway To Heaven” utilizes a tele.

When Bob Dylan controversially “went electric,” he favored an early 60s model, but the Telecaster’s appeal went beyond the folk revival and rock ‘n’ roll into the Bakersfield Sound, pioneered by the likes of Buck Owens, Don Rich and Merle Haggard. Both artists built the scene and their careers off the back of Telecaster guitars, while Johnny Cash’s guitarist Luther Perkins used the earlier Esquire model to create the famous “boom-chicka” rhythms from much of Johnny’s music.

Marty Stuart, and Waylon Jennings were also well known for their Telecaster use throughout their careers.

And they’re still used to inform the sounds of country music today.

Keith Urban is a frequent tele player, particularly one that features decorative binding and three pick-ups.

Brad Paisley has made Telecaster a signature aspect of his brand. Brad owns an extensive collection of them, including a ’68 Red Paisley model called “Old Pink”, that he refers to as his “warhorse.”

More recently Brad has instead been using custom tele-inspired guitars made by Crook Custom Guitars, but in 2017 Fender released a signature Brad Paisley tele in a silver sparkle roadworn finish.

I love Fender Telecasters for the same reason that country music at large does: because they are simple yet versatile, and produce a classic sound that you just can’t beat.

And after 70 years in the biz, and I don’t think they’re going anywhere just yet. Thank God! 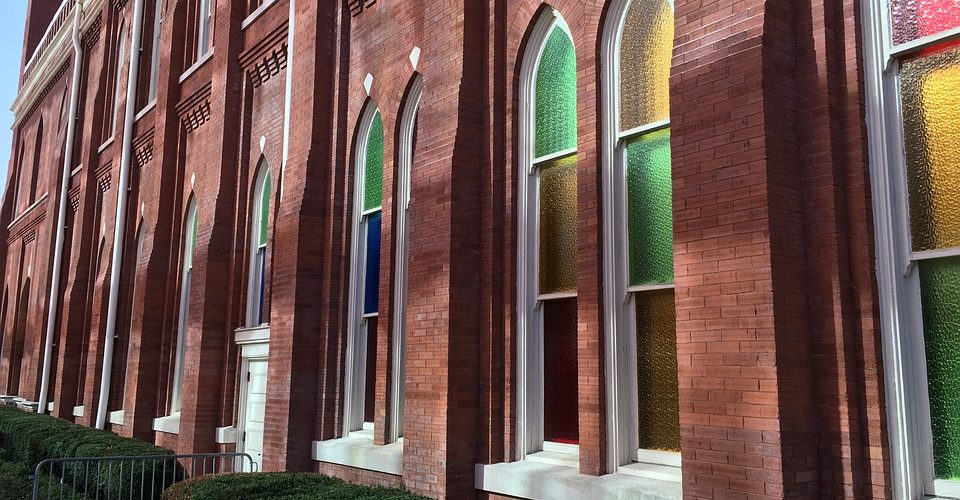 Nashville is a very special place for many of us in country music, and I am no exception. I’ve frequently visited Music City and love the history, the vibe, and the people. I thought I would recount three of my favorite places to visit there for anyone who’s thinking about going, or who just wants to learn a little more about the home of country music.

The Ryman is one of the oldest buildings still standing in a comparatively modern city, but it almost didn’t survive to the present day. Built in 1892 by Christian convert and successful businessman Thomas Ryman, he constructed what was initially known as the Union Gospel Tabernacle, as a place for Nashvillians to attend large scale tent revivals. It took seven years to build and cost an astonishing equivalent of $2.7 million today, leading it into considerable debt from the beginning. While used as a place of worship in its early years, it was frequently leased out for secular purposes to tackle the debt, and throughout the first quarter of the twentieth century became a home for cultural and performing arts. It was also renamed the Ryman upon its founder’s death in 1904.

It wasn’t until 1925 that the Grand Ole Opry was conceived, and after hosting its live performances at several local venues, in 1943 the seminal radio show moved to its natural home at the Ryman. The reverent, church-like space still with its original pews and stage served to bring countless country music superstars to Nashville and the world, but by the 1970s was significantly deteriorating and facing demolition. The Opry was moved to what now stands at The Grand Ole Opry House, and the Ryman lay dormant for the next 20 years, although from time to time filming took place in the dilapidated building.

In the 1980s Gaylord Entertainment acquired the Ryman as one of its assets, and it’s the main reason the Auditorium is once again available for public use. They conducted restoration on the century-old structure throughout the 1990s, and it now lives as an historical performance space fit for modern use. It lies in the center of Nashville’s Broadway district, and frequently plays host to shows, public tours, and filming, with just as much charm and magic as it always had.

The Hall of Fame is one of the largest non-sports buildings in modern Nashville, and is nowadays quite a sight to behold. However, it had fairly humble beginnings, initially conceived in 1961 by the fledging Country Music Association. Together with the cultural non-profit Country Music Foundation, a structure was erected at the top of Music Row, housing a small number of artefacts and a library, while various icons from decades past were officially recognized as honored members of this new institution. The building itself first opened in 1967, with further expansion works occurring throughout the 1970s and 1980s. The collection continued to grow, and in 2001 it was decided that the museum would move to a much larger space at the heart of Downtown Nashville. The move was a rousing success, and visitors now enjoy substantial and thorough guided tours or free roaming. In 2014, a further $100 million expansion doubled its size, incorporating retail stores, classrooms, and much more, making it an all-rounded record of and tribute to country music in all its glory. It is a must-visit, and there is always more to experience there every time.

The district of Music Row may seem unassuming at first, comprised of a number of seemingly residential avenues and decorated with mostly traditional southern houses. However, look closer and you realize that many of these innocuous buildings play host to some of the most well-established publishing houses, record labels, songwriting offices, recording studios, radio networks, production houses, and licensing companies in the entire country music industry. The streets are often quiet during the day, and it’s a peaceful but magical walk around the quietly influential neighborhoods as well as the grand sites of ASCAP, BMI, and at the far end, Belmont and Vanderbilt Universities.

More recently investment has reached the area, and upscale restaurants and bars have encouraged the creeping in of gentrification, although there are equally local efforts to fight it and thus preserve the district’s rich history. Some of that history remains in the form of RCA Studios A and B, known as legendary recording houses for some of country music’s biggest stars as well as their similarly-statured peers from every other genre. There are studio tours that run regularly, and they are well worth it to stand where so many incredible events occurred and experience those spaces for yourself.

There is so much more to visit in Nashville than just these three places, but they are excellent places to start, and guaranteed informative and entertaining experiences that’ll leave you feeling richer.